Home > Discography > CDs > We Wish You a Merry Christmas / Snowbound

We Wish You a Merry Christmas / Snowbound 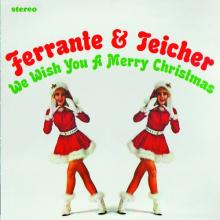 Great 2-on-1 reissue of We Wish You A Merry Christmas and Snowbound with remastered sound.

The legendary Art Ferrante and Lou Teicher, two Juilliard classically trained child prodigies, were lifelong friends who recorded a plethora of top charting albums and hit singles over a career that lasted for over fifty years.

Serious mainstays of the adult contemporary and easy listening formats of radio and retail, Ferrante & Teicher also experimented with the piano in percussive ways never known to the instrument but soon became a much loved sound to their millions of fans. Progressive in style, it was this zest for the instrumentation, the recording techniques in the studio setting, as well as the thousands of concerts they performed in their five decades that made Ferrante and Teicher the most successful piano duo of all time.

United Artists was their home for over thirty years in various incarnations (UA, Liberty, EMI and Capitol Records), and it was here that these power players defined the format and made albums that truly showcased their classic roots to a wide reaching audience.

Not originally considered a Christmas album but a winter conceptual album, Snowbound was a very successful album in 1962. Weaving holiday themed melodies with seasonal thematic tunes like Moonlight In Vermont, Let It Snow and the smash hit Sleigh Ride, which would reprise even bigger fame in the soundtrack to the Jon Favreau and David Berenbaum film Elf, this wonderful album would go on to become a highly collectable album in Ferrante & Teicher’s huge catalog of music.

We Wish You A Merry Christmas was another chart success for Art and Lou as they recorded probably one of the most important albums of this genre ever with some of the most thoughtful and imaginative arrangements of carols, Christmas standards and holiday classics ever waxed. With the first side consisting of superior interpretations of celebrating Christ’s birth and the remainder of the album offering brilliant takes on holiday standards, We Wish You A Merry Christmas is a landmark album that has forever stood the test of time. Just listen to the emotion packed medleys of Hark! The Herald Angels Sing and probably one of the finest recordings ever of O’ Come All Ye Faithful as part of the O’ Tannenbaum Medley. If you don’t have some tears in your eyes after hearing this brilliantly orchestrated and piano filled masterpiece, well then… you’ve come to the wrong place.

Both of these wonderful albums have been out of print for many years… that is until now. Relayer and Friday Music are proud to announce the Ferrante & Teicher masterpieces: We Wish You A Merry Christmas and Snowbound, both now on a newly remastered compact disc. Remastered, remixed and restored from the original United Artists tapes by Scott Smith (Ferrante & Teicher/Roger Williams) with Joe Reagoso (Elvis Presley, James Taylor, Bette Middler), these recordings sound beautifully brilliant as you remember them. We have also included the original LP artwork not seen in decades as well as all of the heartfelt holiday and Christmas classics as you remember them… Ferrante & Teicher style!

Dedicated To Art and Lou – your music, hard work and brilliant recording and concert careers will live on forever. God Bless the both of you and your families. Thank you forever for the O’ Tannenbaum Medley… the finest song I ever heard.

Joe Reagoso would like to thank the great Scott Smith for his help in the preparation of this wonderful compact disc. Kudos to Jarrett McGehee and Jake Jacob at EMI. Thanks to Cary Mansfield at Verese Sarabande. Love always to Karen, Martha and Boz. Happy Birthday Jesus!

It's always a pleasure to read liner notes by someone who both had a hand in producing the reissue and who appreciates the music. As I read the notes above, one line caught my eye and I immediately thought it must be an error:

Decades? Yeah, it has been that long! It's been more than 20 years since I walked into the now-defunct Tower Records in Vienna, Virginia and spotted the previous 2-on-1 reissue resurrecting all the "United Artists" logos. It was a great CD but the sound was inferior to this newly remastered one.

That previous reissue lasted all of a couple of holiday seasons before it was deleted from the catalog and I'll never understand why. Unlike most of the EMI reissues, it had class! A lot of thought went into the packaging. My guess is that the initial sales fell onto the wrong side of the bell curve so some beancounter decided it wasn't worth keeping in the catalog.

Sadly, EMI had neglected the F&T catalog for so long that many fans probably never even knew about the reissue. This was the days before web browsers and people couldn't just Google "Ferrante & Teicher" to find that their favorite music was at Amazon.

Let's hope that this Limited Edition reissue isn't so "limited." If all of Ray Conniff's Christmas CDs can remain in print for more than 25 years, there is no reason why Ferrante & Teicher's can't enjoy the same fate.