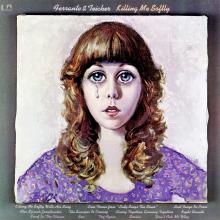 In the late-1970s, I discovered Ray Conniff while combing through my father's collection of reel-to-reel tapes. I passed over a dozen tapes before the cover girl of Young At Heart caught my eye.

My first experience with Ferrante & Teicher was similar. Sometime during the 1970s, my father graduated from open reels to 8-tracks. He must have gotten a great deal on Reader's Digest tapes because he sure had a lot of them. One Hawaiian album is bad enough but who buys a box set? Fortunately, I found something a bit more "cool" in his 8-track storage case: Ferrante & Teicher's Killing Me Softly with "quadrasonic" sound!

Then one day I heard a radio station broadcast of the title song in stereo and it sounded awful, as if I was hearing only half the music. Years later I found the stereo Lp and I still feel it is much weaker than the original quad mix I heard as a kid. If anyone has transferred the four discrete channels of the 8-track to DVD, please let me know! I’d love to hear it again.

The sequence of songs was a bit different on the two channels of the quad 8-track: